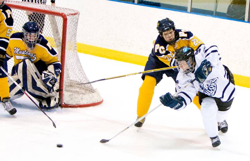 Hosted by Mona Shores Sailors Hockey Team, the Mustangs are an annual participant in the Stan Konrad Memorial Tournament each January.  This year's participants include Grand Haven, PC, East Kentwood and Mona Shores.

Stan Konrad, a native of Trois-Rivieres, Quebec, Canada, came to Muskegon in 1960 as a 22 year old to play for the Muskegon Zephyrs in the International Hockey League. Stan’s career in pro hockey with the Zephyrs continued through the 1965 season and he is still regarded as one of the best to wear a Muskegon uniform.

This annual tournament is in remembrance of this local hockey hero and the contributions he made to high school hockey in Michigan.